Regional Conflict in the Horn of Africa: Comparative Study of Somalia and Rwanda 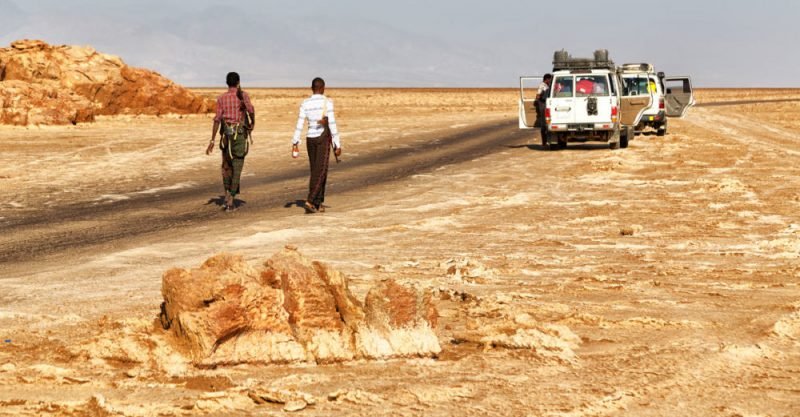 Horn of Africa, the easternmost extension of African land is defined as the region that is home to the countries of  Djibouti, Eritrea, Ethiopia, and Somalia whose cultures have been linked throughout their long history. A part of the Horn of Africa region is also known as the Somali peninsula; this term is typically used when referring to lands of Somalia and eastern Ethiopia.

The Horn contains such diverse areas as the highlands of the Ethiopian Plateau, the Ogaden desert, and the Eritrean and Somalian coasts.  Its coasts are washed by the Red Sea, the Gulf of Aden, and the Indian Ocean, and it has long been in contact with the Arabian Peninsula and southwestern Asia. Islam and Christianity are of ancient standing here, and the people speak Afro-Asiatic languages related to those of North Africa and the Middle East.

The people of the Horn of Africa are intimately linked by thousands of years of shared culture and history yet there is much diversity in politics and religion. This region could be said to embody the whole range of conflicts that are the key issues shaping the 21st century. The central fields of activity of these people are Ethiopia, Somalia and Djibouti, but there is some spillover into neighboring Kenya, Sudan and Egypt. There are also related people groups in Tanzania. The peoples of the Horn of Africa are sub-divided into six people clusters: Beja, Cushitic, Ethio-Semitic, Omotic, Oromo, and Somali.

Conflict resolution and the end to regional instability are key security issues. Protracted internal conflicts also known as complex political emergencies, have been prevalent in the Horn of Africa since 1970s. Conflict resolution and mediation within this geographical area is of high priority for inter-governmental organizations, Western and African governments. Internal conflicts have been allowed to continue with the support of neighboring states in the region.

In the Horn of Africa – as in other regions where states are weak – conflicts from one country tend to spill over into the neighboring states and become entwined with conflicts there. Among the contributory factors are- insurgent movements that establish bases in neighboring countries with or without that regime’s support; regimes supporting insurgencies in neighboring countries based on the logic of ‘my enemy’s enemy is my friend’; refugee flows; and ethnic groups – often with nomadic or semi-nomadic adaptations – that straddle the borders.

Conflict Patterns of the Horn of Africa

The Horn of Africa – Djibouti, Eritrea, Ethiopia, Somalia and Sudan – has experienced both intra- and interstate conflicts.

Since the demise of Barre in 1991, Somalia has been characterized by the lack of an overarching state, and fluctuating levels of conflicts between various groups. This further evoked the echoes of the Ogaden War (1977–78), when Somalia invaded Ethiopia with the purpose of annexing the Somali-inhabited Ogaden region. Ethiopia and Eritrea can be said to be the major hostile states in the Horn. Beginning in the 1960s and 1970s, rebel forces from northern Ethiopia and Eritrea fought against the Ethiopian government, seeking to overthrow the dictatorial regime. They were successful in 1991, and Eritrea gained its independence in 1993. However, the cordial relations between the newly formed Eritrean and Ethiopian governments quickly collapsed, resulting in an all-out border war in 1998. While a peace deal was signed in 2000, the diplomatic relations between the two countries remained aggressive.

In the West, Sudan has indeed been afflicted by violence almost constantly since its inception as a state. Also on western frontier of the Horn of Africa, the Gambella region of Ethiopia, bordering Sudan, has been plagued by local and regional disputes for several years, affecting both governmental and non – governmental actors.

These interstate conflicts are triggered and generated by regional forces that intensify existing lines of conflict, as well as by global geopolitical ramifications. These complex examples illustrate the overwhelming array of forms of violence in the broader Horn of Africa. Although it is impossible to distinguish the historical and contemporary consequences of one dispute from the other, this does not imply that the conflicts in the Horn of Africa are detached from disputes outside the region.

Known as the “land of a thousand hills”, Rwanda’s peculiar geography has played a major role in its growth. Before the European exploration and invasion of Rwanda, the Hutu and Tutsi tribes were largely peacefully side by side. Hutus were primarily Bantu peasants, accounting for around 85 per cent of the population. Tutsis were primarily agricultural refugees from Ethiopia, accounting for around 15 per cent of the population. Hutus and Tutsis shared the same Kinyarwanda language, they were intermarried and had no distinguishable cultural traditions or characteristics.

On 6 April 1994, a plane carrying the President of the Hutu of Rwanda, and the President of the Hutu of Burundi hit a surface-to – air missile, killing both men shortly before the plane was due to land in Kigali. This incident caused the turbulent racial hostilities between Tutsis and Hutus to erupt. Mass unrest and slaughter emerged in Rwanda. For 100 days, the Hutu violent militias slaughtered more than 800,000 Tutsis and their Hutu supporters — the third biggest genocide in the 20th century.

A mass migration of Rwandan, Burundian and Zairian refugees followed in the wake of the genocide. Fearing revenge, two million Hutus had fled Rwanda, while 750,000 Tutsis had returned home abroad. It was estimated that 2.1 million refugees, distributed across 35 camps, had fled to neighbouring countries.

Those who experienced the misery in Goma described it as “the hell on earth.”

Situated in the Horn of Africa, Somalia is home to notorious warlords and gangs and is one of the poorest economies in the world. At the end of 1969, President Abdirashid Ali Shermarke was assassinated by his own bodyguard, and the military government seized over in a coup headed by General Mohamed Siad Barre. Barre declared himself as the new leader, aiming to govern in the form of a highly centralised and violent Marxist regime. Between 1977 and 1978, the Ogaden War prompted and Barre asked the UNHCR and other humanitarian organizations to provide essential food and services for the next decade.

At the beginning of 1982, Mogadishu reported that there were more than 1.3 million refugees in the camps and an additional 700,000 to 800,000 refugees in total. When the assistance landed, Somali authorities set out to divert most of the relief between the aid organisations and the refugees. The Barre regime went so far as recruiting many of the refugees into its military and using international aid to support these military units. Throughout the 1980s, the Barre regime stepped up authoritarian tactics to eradicate opponents from all tribes. When prisons, tortures, and executions mounted, protest parties mobilised themselves. Somalia existed in a constant state of conflict as various clans and rebel forces fought to fill the vacuum of influence.

Since the huge influx of refugees from the Rwandan genocide in 1994 and the resulting cholera outbreak, the international assistance group was confronted with the fact that they had not been trained as an aid organization. They did not have a cohesive set of guidelines that will help them prepare to represent these communities.

The international community invested an estimated $ 2 billion on the response in the first two weeks of the Goma campaign, and nearly 200 institutions played a part. This excess of respondents resulted not only in repetition and wastage of money, but also-in a few extreme cases-inexpensive loss of life. The challenge to provide humanitarian assistance was further compounded by a volatile world of violence and defense. The extent of aggression within the camps was exceptionally high, with 4,000 refugees from a single camp dying as a result of brutality by Hutu militia groups, undisciplined Zairian troops and other refugees.

The refugee situation in Rwanda was a stressful defining moment for the humanitarian field. It focused on the push for transparency and success management that was gaining popularity as agencies were entering more complex confrontation conditions in the 1990s.

The unexpected number of institutions and organizations, their lack of oversight, the diversity of requirements of various agencies, coupled with inadequate results and lack of competence, fueled fears that humanitarian assistance in Rwanda and refugee camps was in desperate need of revision.

Somalia, one of the poorest and least industrialized nations in the world, was ravaged in the 1990s by years of civil war and famine following the overthrow of the tyrant Siad Barre. Somalia has hosted some of the most ambitious and expensive humanitarian acts to date.

In the absence of peace and order and with the spread of firearms and heavy artillery, travel became risky, demanding exceptional intervention on the part of humanitarian organisations. For example, in the absence of an arrangement with the warlords in its field of operations, the ICRC employed armed guards for the first time to secure relief aid and convoys. Numerous death threats and violent attacks on humanitarian workers had occurred, and many lost their lives while working in Somalia during this period.

Military and civilian authorities have failed to coordinate civil-military relations at this early level. From opposition factions and warlords battling for government power to multinational NGOs and the UN, who had varying ideas about how best to support the people, Somalia had become a morass of overlapping interests and opposing goals.

The global community ‘s combined aid and defence efforts have cost an estimated $3 billion. And less than 10% moving into real assistance or immediate relief operations. Hundreds of foreign troops and thousands of Somalis have been wounded or killed in these joint campaigns, and these efforts have not had a major effect on the defence, security or welfare of Somalia.

ROLE OF MEDIA IN BOTH COUNTRIES

In Rwanda during the 1900s, the mainstream media attention and distribution of local photographs depicting hungry children, helpless people and teens holding weapons went viral. The goal was to remove the geographical divide and put the truth of unseen people who have struggled thousands of kilometers away closer to the safety of the ordinary American households.

This cultural trend was later referred to as the CNN effect, which, through television and photographic images, made Americans aware of the humanitarian situation in countries like Somalia.

In Somalia, a UN humanitarian mission led by American military was launched and it was to be known as Operation Restore Hope. Soon after the mission was deployed, a series of unfortunate events happened and the role of media was shifted. Real-time images of American rangers being dragged through the streets by their assailants, produced public outrage. Even after US soldiers were killed and the UNITAF mission was withdrawn, descriptive images about the Somalia chaos, continued to appear on media outlets. Consequently, a mix of emotions and reactions developed, from empathy to rage and overall fatigue.