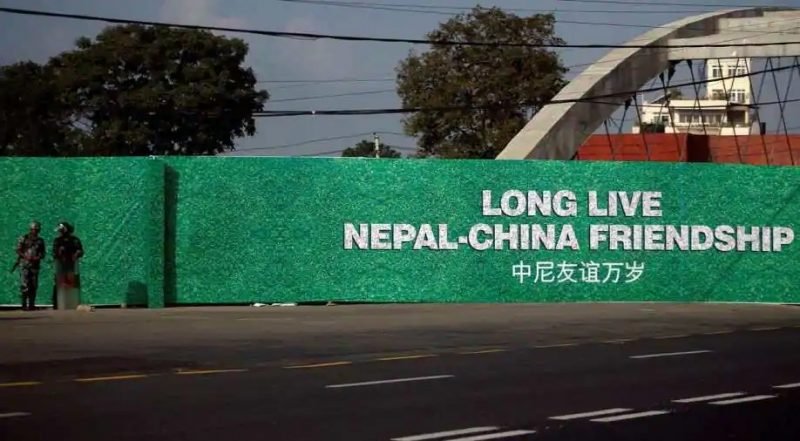 Following reports in the media of the Chinese occupation of Nepali territory, in which the media had cited a government survey, Nepal’s foreign ministry has refuted the reports and said there has never been such a survey that is being cited.

The ministry said in a statement Thursday (25 June), “The news allegedly based on the “report” of the Ministry of Agriculture and Livestock Development which that Ministry has already refuted and clarified stating that such “report” doesn’t exist and that the subject matter doesn’t fall under its jurisdiction. (sic)”

It had earlier been reported that a Nepali government’s agricultural ministry’s survey had found that four districts of Nepal have lost up to 36 hectares of land to China’s encroachments at 10 places owing to their infrastructure development along the border with Tibet, in which the Chinese have changed the course of the rivers that form the boundary with Tibet.

The survey document also recorded the possibility of China setting up border observation posts with armed police personnel in these places.

Earlier, it had been reported that an entire village named Rui Gaun, in Nepal’s Gorkha district, has been governed by China as part of their Tibet Autonomous Region for six decades even as the village had been with Nepal till 1962, even paying revenue to the Nepali government.

The Himalayan Times quoted Bir Bahadur Lama, the Ward Chairperson of Chumanubri Rural Municipality Ward No. 1, as saying, “I have heard from old residents that security personnel from both Nepal and China had gathered in the area to erect border pillars after which Rui became Chinese territory.”

The paper also quoted an employee at Gorkha Land Revenue Office as saying that the residents of Rui Gaon used to pay revenue to the district until 1962 and their office still has the record of those payments. Annapurna Post has also reported the same.

The Post quoted historian Ramesh Dhungel as saying that Rui and another village Teigha were once in the northern part of Gorkha district.

He was quoted as saying, “Rui Gaun is part of Nepal. Neither Nepal lost it in war nor it was subject to any special agreement or contract to let it belong to Tibet. Nepal lost both Rui and Tegha villages due to the negligence at the time of fixing pillars.”

Despite The Himalayan Times publishing the survey document, the Nepali government has refuted the existence of the document, with the concerned ministry saying in a statement that the reports are false and border areas are not under their jurisdiction.

Even prior to these reports, a Vox program from 2017 had mentioned the Chinese encroachment of Nepal’s land. In the episode on the Nepal-China border in Vox’s Borders series, producer Johnny Harris’s driver stopped their car well before the actual border.

Explaining this, Johnny said, “So I am on the windy Tibetan plateau, looking at the border but we are half a kilometre away and something really weird just happened. My driver, who is Nepali, just stopped and said we can’t go any further. I was like, well, we are on Nepali sovereign territory, why couldn’t we just go up to the fence? You’d be able to do this in every other country I have been to. He (the driver) said, no, the Chinese will come and they’ll snatch us. Now we are very much in Nepali side, but the Chinese come in here routinely to ask questions, to even detain people randomly. They have surveillance, they have watchtowers even on the Nepali side.”

About the lack of intense protests on such reports and incidents, Mr Sachchidanand Mishra, publisher of Himalini, which is one of the few Hindi magazines and portals in Nepal, said this suggests that intense protests regarding the territorial dispute with India were more about the anti-India sentiment rather than a sense of territorial integrity.

“The most intense protests on the dispute with India came from the ruling Nepal Communist Party itself which is now largely silent on reports of Chinese encroachment. Also, why would they speak on this? Protesting against China does not serve their interest,” said Mr Mishra.

He added, “Protests against China are indeed happening but they are mostly by the non-partisan younger generation and their numbers are also not large.”

He added that Prime Minister KP Sharma Oli’s government is also in a precarious position at the moment, saying, “Prachanda and Madhav Kumar Nepal have accused Oli of not implementing promises that he made in past, and this may be the reference to the two factions of NCP, the Oli’s UML and Prachanda’s MC, sharing the prime ministerial post.”

At such a time of political volatility, it is not in Prime Minister KP Sharma Oli’s interest to protest against China. Even if it was not his intention when he upped the ante with India, the nationalistic surge in the wake of the territorial dispute with India gave him some breathing space. Protesting against China does not provide any breathing space.