Biden to call out Trump’s ‘singular responsibility’ for Jan. 6 attacks 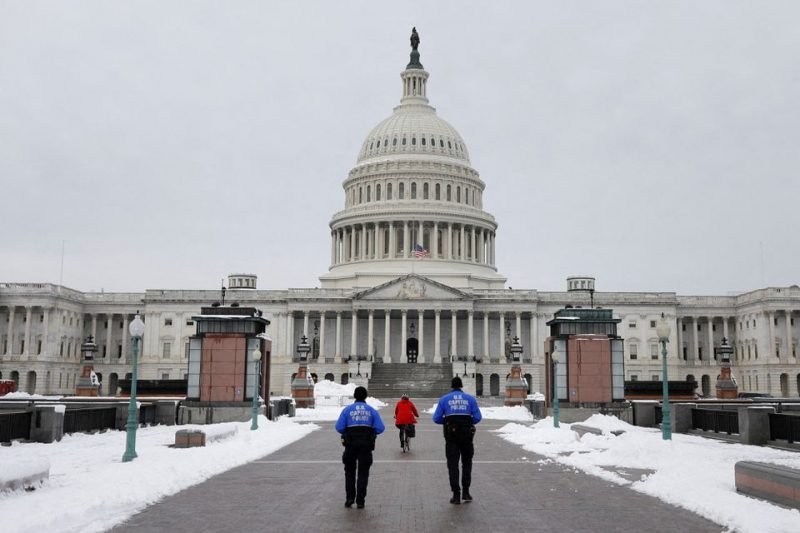 U.S. Capitol Police Officers patrol the East Front Plaza on the eve of the first anniversary of the January 6, 2021 attack on the Capitol in Washington, U.S., January 5, 2022. REUTERS
PDF Button

President Joe Biden will tell Americans that his predecessor, Donald Trump, carries “singular responsibility” for the deadly Jan. 6 attack on the Capitol when he marks the first anniversary of the assault on Thursday, the White House said.

Biden and Vice President Kamala Harris, both Democrats, will speak on Thursday morning at the U.S. Capitol, one year after a mob loyal to Trump raided the complex in a failed attempt to stop the certification of Electoral College votes that officially delivered Biden’s election victory.

Biden and his top aides have been reluctant to talk directly about Trump since the former senator took office last January, even as the Republican former president continued to spread lies about his election loss, and Democrats, historians and civil rights activists have grown increasingly concerned about the future of the nearly 250-year-old representative democracy. Thursday’s speech comes after Biden spent months encouraging Americans to unite against the COVID-19 pandemic and rebuild together after weather disasters.

On Thursday, Biden will “lay out the significance of what happened in the Capitol and the singular responsibility President Trump has for the chaos and carnage that we saw and he will forcibly push back on the lies spread by the former president in an attempt to mislead the American people and his own supporters as well as distract from his role in what happened,” White House Press Secretary Jen Psaki said.

Trump canceled a news conference at his Mar-a-Lago estate in Florida that had been scheduled for Thursday evening, blaming what he called the “bias and dishonesty” of the House of Representatives probe of the attacks and the news media, a favorite target.

Taylor Budowich, a Trump spokesperson, said it was “unsurprising” that Biden would spend Jan. 6th “trying to further divide our nation, adding “division is the only thing Democrats know how to do.”

Four people died on the day of the riot, and one Capitol police officer died the day after defending Congress. Dozens of police were injured during the multi-hour onslaught by Trump supporters, and four officers have since taken their own lives.

The White House said Biden would push back against Trump’s false claims, adopted by many of his followers, that his election defeat was the result of widespread fraud, and attempts to downplay the worst assault on the Capitol since the War of 1812.

She added that the president sees the deadly attacks as a “tragic culmination of what those four years under President Trump did to our country.”

Harris will use her remarks to “outline that the American experiment is being tested, and that we must work to secure voting rights, ensure free and fair elections and safeguard our democracy for generations to come,” an administration official said.