Unfolding of the multi-faceted National Security Law in Hong Kong 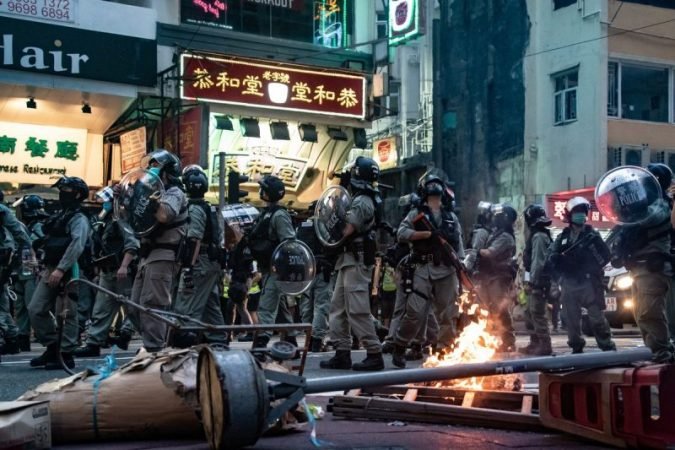 The National Security Law imposed by China on Hong Kong has been debated within the autonomous city as well by countries abroad. China stepping into the ‘internal’ matters is testified as an imposition of authority on the people of Hong Kong. The law not only jeopardizes the independent function of Hong Kong but poses as an obstacle which might have the potential to strip it off from the immaculate financial autonomy. The National Security Law covers four broad domains of secession, subversion, terrorism and collusion with ‘foreign’ forces.

The law has been characterized as Beijing’s move to curb freedom of speech and protests. The decision has moved countries, especially the US and the United Kingdom. These countries have their specific interest with Hong Kong, but the political instability caused by the implementation of this law puts many issues at stake. With the ongoing trade war between US-China and the verdict given by the British Parliament to give citizenship to British National, Overseas Passport holders have quite stirred a debate.

Arijita Sinha Roy, Associate Editor at The Kootneeti, interviewed Duncan Bartlett, Editor of Asian Affairs to give a better understanding of the conflict.

Amidst the growing tensions between US-China, the draconian National Security Law is expected to grow and take shape into a very different outcome. Mr Bartlett introduces how countries like Australia and Canada will be jumping alongside other NATO allies to move deeper into the trade struggle against China. Although the dynamics are bound to change in South Asia, the question which arises if there will be any damaging effect on Washington’s policy juxtaposed to other South-East Asian countries. The political instability in the region could be an alarming sign that economic, military and political shifts are on their way to completely take over the region.

Moreover, the Hong Kong issue has to be dealt with utmost fragility, if one has to look from a US perspective. President Donald Trump had recently announced that the economic and financial privilege given to Hong Kong will be stripped of as it can no longer trade with a state which is controlled by Beijing. Duncan Bartlett interjects at this point saying, “Hong Kong is going to lose its economic privileges-we may need to relocate a lot of companies. This is a politically motivated move as part of the US-China trade war. Both the Democrats and Republicans show their displeasure towards China.” However, such a decision brings up a dilemma as “major actions against Hong Kong’s financial system risk hitting the US.”

The United Kingdom offering citizenship to British National Overseas passport holders has attracted major condemnation from Beijing. The UK feels that China has gone a little too ahead this time and that it has breached the Sino-British Joint Declaration, 1984. It has accused the UK of interfering into the internal matters of the country, and that Hong Kong will be dealt with entirely as a domestic issue. Mr Bartlett mentioned that China sees itself in a position where it is not willing to accept ‘one country, two systems’ policy and highlights these sentiments of anti-patriotism being manipulated by the United States of America and the United Kingdom; the latter by obviously handing out citizenships.

The Hong Kong crisis presents multi-faceted junctions which are widely contested. Carrie Lam, the Chief Executive of Hong Kong has mentioned it on several occasions that the National Security Law, widely acclaimed as draconian should be seen in terms of a progressive step to lessen the gap between Beijing and Hong Kong. The law will not undermine any individual’s freedom or at large the autonomy of Hong Kong. Does that in any way implies she supports the National Security Law? Duncan Bartlett says, “Well, she associates the protest going on the streets of Hong Kong with terrorism and I see why because there was so much violence. But protestors were using nothing more than umbrellas in the face of the Police Water Canons.” Mr Bartlett also remarked that Hong Kong has a distinctively different culture than the rest of China and Carrie Lam is intentionally put there to support all the policies pursued by Beijing-in short a ‘puppet’.

So how far will the intervention by the UK go with regards to this crisis? The Magnitsky Amendment could be seen as an interjection to it. Duncan Bartlett says, “So this idea of having special sanctions against people or entities responsible for human rights violations is being used by the British. It would be possible for the British Parliament to extend the list and include personalities like Carrie Lam. It is not quite straightforward though, is it? She is a political representative who has been involved in something which has been legally introduced, it is not that she is a criminal. Who should decide her punishment?” The people in Hong Kong have already shown strong condemnation against the draconian law and now if foreign interventions were to be made in this direction, Duncan points out that it gives a chance to China to prove to its people that this exactly what we warned you about and thus we are having the National Security Law.

However, one can contest if such tacit moves by China is leading towards imperialism with Chinese characteristics. Mr Bartlett perceives it in a slightly different mechanism. He says, “The central idea of China is socialism with Chinese characteristics moving on a path towards communism. The trajectory is directed towards ending the 100 years of humiliation (Japanese invading Manchuria and the British invading Hong Kong). They don’t see themselves as imperialists, but rather see the US and UK as imperialists as they try to expand their dominance by interfering into Chinese territory.” He further puts forward that since Hong Kong has always maintained a certain sense of autonomy, if not entirely independent, Beijing imposing the draconian law might appear a little bit as though of an imperialist.

The aforementioned arguments have widened the scope of realizing the depth of the implementation of the National Security Law in Hong Kong and leaves behind another set of questions which are yet to find their answers.