Engagement with Europe under the EAM has witnessed a significant boost & assumes importance in a post Brexit scenario which has a lead to a broad consensus within mainland Europe & with the United States to restore engagement with Russia & initiate a process of reconciliation as Moscow’s ties with Beijing are strengthening rapidly. It is evident today that the American dominance is challenged by Beijing & Moscow in Eurasia while the Indo-Pacific is where Chinese expansionism is being challenged & India’s presence at the centre of this geographical space has its own consequences. The Eurasian region is strategically vital for India firstly for furthering its interest in the Arctic, secondly in Delhi’s bid to join various multilateral institutions & regimes & finally in terms of security in the Indo-Pacific region. This renewed outlook is exemplified by EAM’s visits to the EU capital Brussels as well as to Moscow. India’s engagement with powers like the Visegrad 4 (Poland, Slovakia, Hungary & the Czech Republic) in Central Europe has also witnessed a push with EAM’s visits to Warsaw & Budapest. The scope of this article is to discuss separately, the strategic importance of President Ramnath Kovind’s recent visits to Iceland, Switzerland & Slovenia which should be seen in this context of a broader Eurasian engagement.

President Kovind visited Reykjavik on the 10th & 11th of this month along with an Indian business delegation. He held bilateral discussions with the President of Iceland Guðni Jóhannesson & several memoranda of understanding (MoU’s) were signed for cooperation in the sectors of sustainable fishing practices, marine economy, shipping, renewable energy, agriculture, automobiles, innovation & biotechnology, climate change mitigation, dealing with marine litter & clean energy production. President Kovind also expressed his gratitude to Iceland for its continued support to the cause of identifying terrorism as a major threat to India as well as for supporting India’s permanent membership at the United Nations Security Council (UNSC). 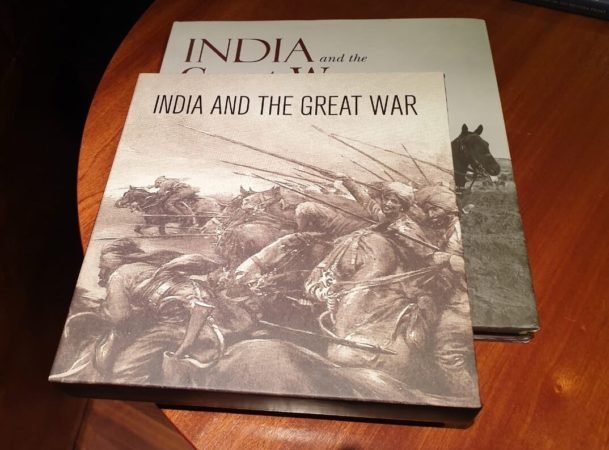 President Kovind also presented President od Iceland books that tell the story of the valour and sacrifice of over a million Indian soldiers who fought bravely during World War / Image: Twitter

The importance of Iceland, however, is by virtue of its geographical location & being an Arctic littoral state. Iceland currently holds the Chairmanship of the Arctic Council which the country assumed in May this year & President Kovind congratulated President Jóhannesson for the same. India holds an observer status in the Arctic Council from 2013, whose headquarters are located in Tromsø, Norway. Climate change is causing the sea ice in the Global Common Arctic region to melt leading to increased shipping activity. The littoral states hold the biggest stakes & exercising control over navigable routes & resources of the region. Most importantly the region is home to large deposits of energy resources & for a country with a growing economy like India the regions assumes special significance. The visit of the President comes on the heels of Prime Minister Modi’s visit to Vladivostok in the Russian Far East, where Indian companies pledged cooperation in energy exploration in the Arctic region. Holding an observer status in the Arctic Council restricts India’s influence & with the signing of the sovereignty clause Delhi can moot new projects & make suggestions only by collaborating with one of the member states & subjected to the discretion of the Chair of the Council. Climate change in the Arctic has the potential of impacting the monsoon and this can adversely affect the agriculture sector, therefore India primarily focuses on scientific research in the region. With increasing prospects & viability of the Arctic sea routes, the importance of the Indian Ocean for commercial shipping for states like China is decreasing, hence, India’s role in the Arctic as a responsible partner with stakes in energy, ecological protection & exploration without military presence should remain Delhi’s priority.

The second leg of President Kovind’s travel to Europe was to Switzerland. President Kovind addressed the Federal Council of Switzerland on the 13th of this month in the presence of his counterpart Ueli Maurer, the President of the Swiss Federation. The President in his address stressed upon India’s drive to empower its young demographic with skills relevant for the digital age as well as in the direction of machine intelligence to usher in the 4th Industrial Revolution. He also pointed out to the emergence of a robust Start-Up ecosystem in India & invited the Swiss government & businesses to collaborate with them to work in the challenges that face India in terms of climate change & healthcare. The address also mentioned on Swiss clean technologies that have the potential to address India’s ambitious plans in green energy requirements as well as in Science & Technology cooperation. The President also inaugurated the bust of Mahatma Gandhi in the city of Villeneuve located in the French part of Switzerland. 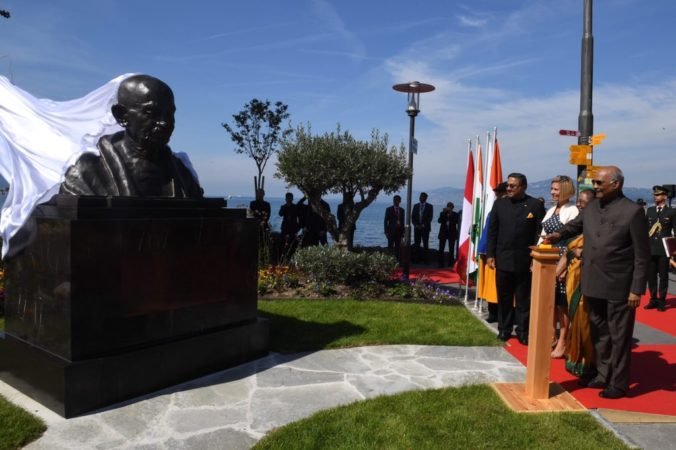 On the strategic front relations with Switzerland is crucial in dealing with terrorism. The president highlighted the role that tax evasion & money laundering as a means of terror funding & India being a victim of cross border terrorism. Bank account privacy clauses led to tax evaders from the sub-continent opening their bank accounts in Switzerland & the massive rise in black money which is being used by some for terror funding operations in India. The President expressed his happiness over the first automatic exchange of information on tax matters which is due in a few weeks. This information will have the dual purpose of identifying the money launderers, tax evaders & possibly even provide information on terror funding operations. In the area of multilateralism, the President expressed his gratitude to Switzerland for its support to India’s bid to become a member of the Nuclear Supplier’s Group (NSG). The NSG is an export control regime that seeks to prevent countries from the proliferation of nuclear materials, equipment & technologies that can lead to the creation of nuclear weapons. With India not being a member of the Nuclear Non-Proliferation Treaty (NPT), the prospects of being a member of NSG are limited and thus prevent India from access to nuclear technologies in medical applications, state of art reactors for power plants etc. This also hinders indigenous technologies from getting commercialized & prevents India from marketing its technologies internationally, thereby affecting its ambitious targets of transitioning into clean energy production. The President also invited Switzerland to become a member of the International Solar Alliance (ISA) which was established post the Paris Climate Deal in 2015 in a joint effort between India & France. 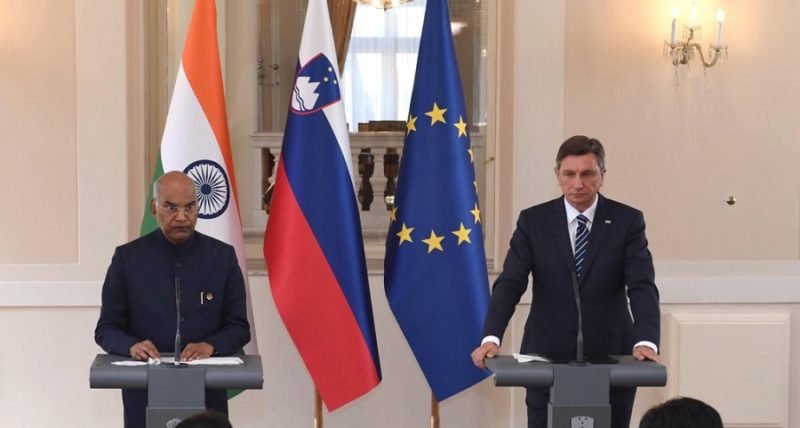 The final stop of President Kovind’s travel was in Ljubljana the Slovenian capital city marking the first such instance of an Indian First Citizen on a state visit to this European nation. President Kovind was received by his counterpart Borut Pahor in the Congress Square & the both paid tributes at the Monument of the Victims of All Wars. Thereafter the President led delegation-level talks and addressed the gathering. During his address, the President expressed his happiness over improving bilateral trade & the potential of diversifying the trade basket. He also highlighted the opportunities of cooperation between the countries in the field of Artificial Intelligence, robotics, Start-Up & innovation, science & technology, defence & clean water technologies, fighting terrorism. President Kovind invited Slovenia to join the ISA & join efforts in mitigating climate change.

In the context of relations with Slovenia in multilateral forums, the President conveyed his gratefulness that Ljubljana support’s for India’s candidature for permanent membership in an expanded UNSC & also India’s bid for the NSG. Japan seeks to initiate the debate on  UNSC reform this year at the UN General Assembly & this is something that India has been working on as a part of the G4 nations (Brazil, Germany, India & Japan), who demand permanent membership. The G4 argue that the UNSC with the five veto holders was created more than 70 years ago & does not reflect the status quo today. Permanent membership to the UNSC promises India the decision making capability in issues related to its own & global security & thereby dealing effectively with terrorism. It also provides India with a bigger market for its defence exports & revenue to address its critical domestic issues.

Overall, President Kovind in line with the vision of EAM S. Jaishankar has visited important partners as engagement with Europe in the broader context of Eurasia is essential for India’s ambitions in the Arctic, mitigate climate change & for economic growth. In the context of multilateralism, Reykjavik, Berne & Ljubljana support India’s bids for a permanent seat at the UNSC & the NSG. Finally, the engagement with these nations is likely to secure support to India on its actions in Kashmir last month in the upcoming UNGA sessions.